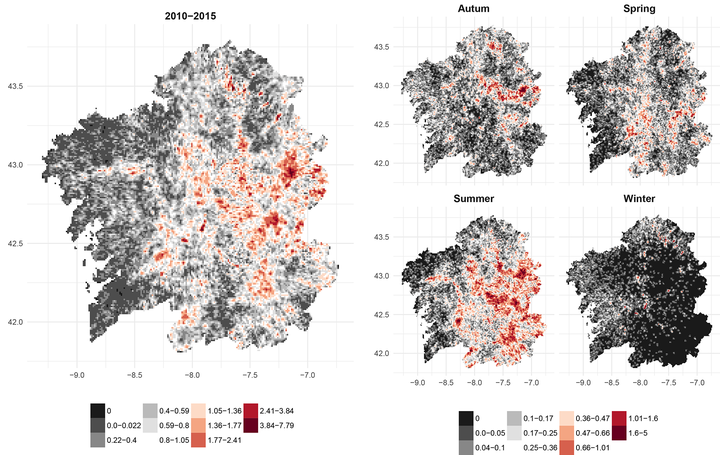 The spatial-temporal patterns of cloud-to-ground (CG) lightning covering the period 2010-2015 over the northwest Iberian Peninsula were investigated. The analysis conducted employed three main methods: the circulation weather types developed by Jenkinson & Collison, the fit of a generalized additive model for geographic variables and the use of a concentration index for the ratio of lightning strikes and thunderstorm days. The main activity in the summer months can be attributed to situations with eastern or anticyclonic flow due to convection by insolation. In winter, lightning proves to have a frontal origin and is mainly associated with western or cyclonic flow situations which occur with advections of air masses of maritime origin. The largest number of CG discharges occurs under eastern flow and their hybrids with anticyclonic situations. Thunderstorms with greater CG lightning activity, highlighted by a higher Concentration Index, are located in areas with a higher density of lightning strikes, above all in mountainous areas away from the sea. The modeling of lightning density with geographic variables shows the positive influence of altitude and, particularly, distance to the sea, with nonlinear relationships due to the complex orography of the region. Likewise, areas with convex topography receive more lightning strikes than concave ones, a relation which has been demonstrated for the first time from a Generalized Additive Model (GAM).