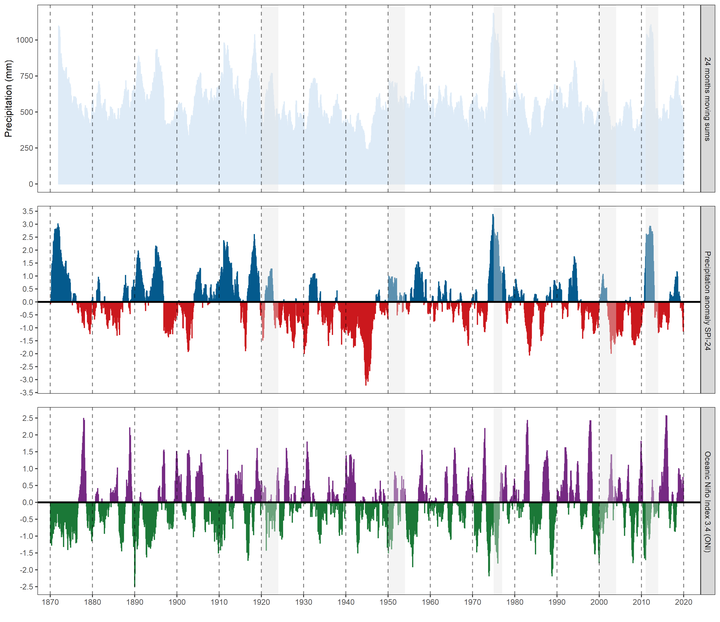 Large, high-severity wildfires, or ‘megafires’, occur periodically in arid Australian spinifex (Triodia spp.) grasslands after high rainfall periods that trigger fuel accumulation. It has been suggested that these fires are unprecedented in the modern era and were formerly constrained by Aboriginal patch-burning that kept landscape fuel levels low. This assumption deserves scrutiny, as evidence from fire-prone systems globally indicates that weather factors often the primary determinant behind megafire incidence, and that fuel management does not mitigate such fires during periods of climatic extreme. We reviewed explorer’s diaries, anthropologist’s reports, and remotely sensed data from the Australian Western Desert for evidence of large rainfall linked fires during the pre-contact period when traditional Aboriginal patch-burning was still being practiced. We used only observations that contained empiric estimates of fire sizes. Concurrently, we employed remote rainfall data and the Oceanic Niño Index to relate fire size to likely seasonal conditions at the time the observations were made. Numerous records were found of small fires during periods of average and below-average rainfall conditions, but no evidence of large-scale fires during these times. By contrast, there was strong evidence of large-scale wildfires during a high-rainfall period in the early 1870s, some of which are estimated to have burnt areas up to 700 000 ha. Our literature review also identified several Western Desert Aboriginal mythologies that refer to large-scale conflagrations. As oral traditions sometimes corroborate historic events, these myths may add further evidence that large fires are an inherent feature of spinifex grassland fire regimes. Overall, the results suggest that, contrary to predictions of the patch-burn mosaic hypothesis, traditional Aboriginal burning did not modulate spinifex fire size during periods of extreme-high arid zone rainfall. The mechanism behind this appears to be plant assemblages in seral spinifex vegetation that comprise highly flammable non-spinifex tussock grasses that rapidly accumulate high fuel loads under favorable precipitation conditions. Our finding that fuel management does not prevent megafires under extreme conditions in arid Australia has parallels with the primacy of climatic factors as drivers of megafires in the forests of temperate Australia.