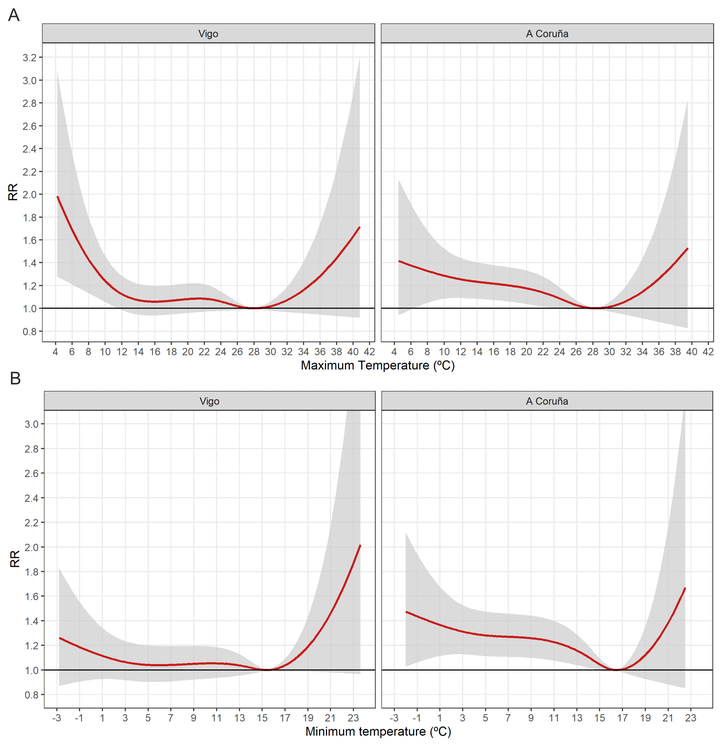 Introduction and objectives. The increase in mortality and hospital admissions associated with high and low temperatures is well established. However, less is known about the influence of extreme ambient temperature conditions on cardiovascular ambulance dispatches. This study seeks to evaluate the effects of minimum and maximum daily temperatures on cardiovascular morbidity in the cities of Vigo and A Coruña in North-West Spain, using emergency medical calls during the period 2005–2017. Methods. For the purposes of analysis, we employed a quasi-Poisson time series regression model, within a distributed non-linear lag model by exposure variable and city. The relative risks of cold- and heat-related calls were estimated for each city and temperature model. Results. A total of 70,537 calls were evaluated, most of which were associated with low maximum and minimum temperatures on cold days in both cities. At maximum temperatures, significant cold-related effects were observed at lags of 3–6 days in Vigo and 5–11 days in A Coruña. At minimum temperatures, cold-related effects registered a similar pattern in both cities, with significant relative risks at lags of 4 to 12 days in A Coruña. Heat-related effects did not display a clearly significant pattern. Conclusions. An increase in cardiovascular morbidity is observed with moderately low temperatures without extremes being required to establish an effect. Public health prevention plans and warning systems should consider including moderate temperature range in the prevention of cardiovascular morbidity.