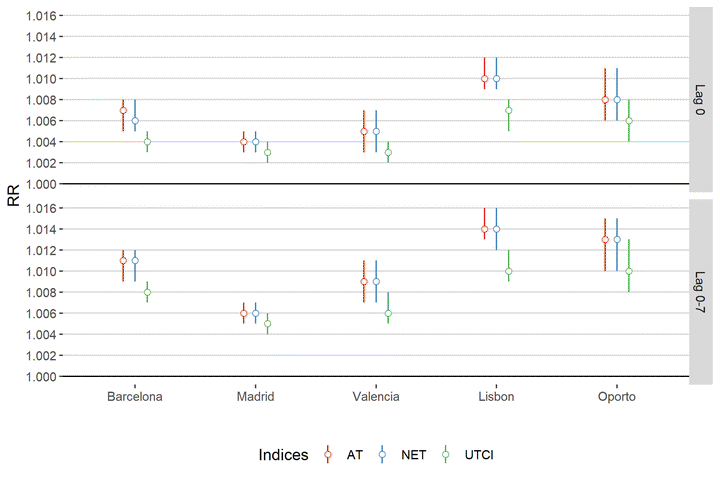 The natural environment has been considered an important determinant of cardiovascular morbidity. This work seeks to assess the impact of the winter thermal environment on hospital admissions from diseases of the circulatory system by using three biometeorological indices in five regions of the Iberian Peninsula. A theoretical index based on a thermophysiological model (Universal Thermal Climate Index [UTCI]) and two experimental biometeorological ones (Net Effective Temperature [NET] and Apparent Temperature [AT]) were estimated in two metropolitan areas of Portugal (Porto and Lisbon) and in three provinces of Spain (Madrid, Barcelona and Valencia). Subsequently, their relationship with hospital admissions, adjusted by NO2 concentration, time, and day of the week, was analyzed using a Generalized Additive Model. As the estimation method, a semi-parametric quasi-Poisson regression was used. Around 53% of the hospitalizations occurred during the cold periods. The admissions rate followed an upward trend over the 9-year period in both capitals (Madrid and Lisbon) as well as in Barcelona. An inverse and statistically significant relationship was found between thermal comfort and hospital admissions in the five regions (p<0.001). The highest relative risk (RR) was found after a cumulative 7-day exposure in Lisbon, where there was a 1.4% increase in hospital admissions for each NET and AT degree Celsius, and 1.0% for each UTCI degree Celsius. In conclusion, low air temperatures are a significant risk factor for hospital admissions from diseases of the circulatory system in the Iberian Peninsula, regardless of the index calculated.