Global, regional, and national burden of mortality associated with non-optimal ambient temperatures from 2000 to 2019: a three-stage modelling study 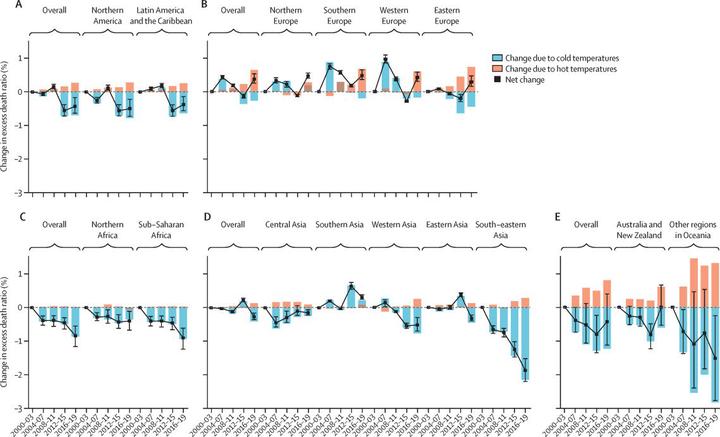 Background Exposure to cold or hot temperatures is associated with premature deaths. We aimed to evaluate the global, regional, and national mortality burden associated with non-optimal ambient temperatures. Methods In this modelling study, we collected time-series data on mortality and ambient temperatures from 750 locations in 43 countries and five meta-predictors at a grid size of 0·5° × 0·5° across the globe. A three-stage analysis strategy was used. First, the temperature–mortality association was fitted for each location by use of a time-series regression. Second, a multivariate meta-regression model was built between location-specific estimates and meta-predictors. Finally, the grid-specific temperature–mortality association between 2000 and 2019 was predicted by use of the fitted meta-regression and the grid-specific meta-predictors. Excess deaths due to non-optimal temperatures, the ratio between annual excess deaths and all deaths of a year (the excess death ratio), and the death rate per 100 000 residents were then calculated for each grid across the world. Grids were divided according to regional groupings of the UN Statistics Division. Findings Globally, 5 083 173 deaths (95% empirical CI [eCI] 4 087 967–5 965 520) were associated with non-optimal temperatures per year, accounting for 9·43% (95% eCI 7·58–11·07) of all deaths (8·52% [6·19–10·47] were cold-related and 0·91% [0·56–1·36] were heat-related). There were 74 temperature-related excess deaths per 100 000 residents (95% eCI 60–87). The mortality burden varied geographically. Of all excess deaths, 2 617 322 (51·49%) occurred in Asia. Eastern Europe had the highest heat-related excess death rate and Sub-Saharan Africa had the highest cold-related excess death rate. From 2000–03 to 2016–19, the global cold-related excess death ratio changed by −0·51 percentage points (95% eCI −0·61 to −0·42) and the global heat-related excess death ratio increased by 0·21 percentage points (0·13–0·31), leading to a net reduction in the overall ratio. The largest decline in overall excess death ratio occurred in South-eastern Asia, whereas excess death ratio fluctuated in Southern Asia and Europe. Interpretation Non-optimal temperatures are associated with a substantial mortality burden, which varies spatiotemporally. Our findings will benefit international, national, and local communities in developing preparedness and prevention strategies to reduce weather-related impacts immediately and under climate change scenarios.