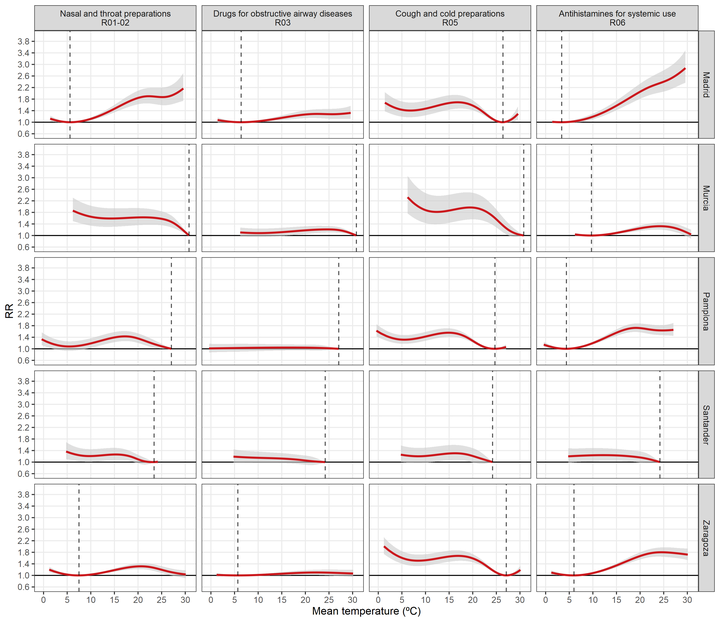 Background: The increased risk of mortality during periods of high and low temperatures has been well established. However, most of the studies used daily counts of deaths or hospitalisations as health outcomes, although they are the ones at the top of the health impact pyramid reflecting only a limited proportion of patients with the most severe cases. Objectives: This study evaluates the relationship between short-term exposure to the daily mean temperature and medication prescribed for the respiratory system in five Spanish cities. Methods: We fitted time series regression models to cause-specific medical prescriptions, including different respiratory subgroups and age groups. We included a distributed lag non-linear model with lags up to 14 days for daily mean temperature. City-specific associations were summarised as overall-cumulative exposure-response curves. Results: We found a positive association between cause-specific medical prescriptions and daily mean temperature with a non-linear inverted J- or V-shaped relationship in most cities. Between 0.3% and 0.6% of all respiratory prescriptions were attributed to cold for Madrid, Zaragoza and Pamplona, while in cities with only cold effects the attributable fractions were estimated as 19.2% for Murcia and 13.5% for Santander. Heat effects in Madrid, Zaragoza and Pamplona showed higher fractions between 8.7% and 17.2%. The estimated costs are in general higher for heat effects, showing annual values ranging between €191,905 and €311,076 for heat per 100,000 persons. Conclusions: This study provides novel evidence of the effects of the thermal environment on the prescription of medication for respiratory disorders in Spain, showing that low and high temperatures lead to an increase in the number of such prescriptions. The consumption of medication can reflect exposure to the environment with a lesser degree of severity in terms of morbidity.