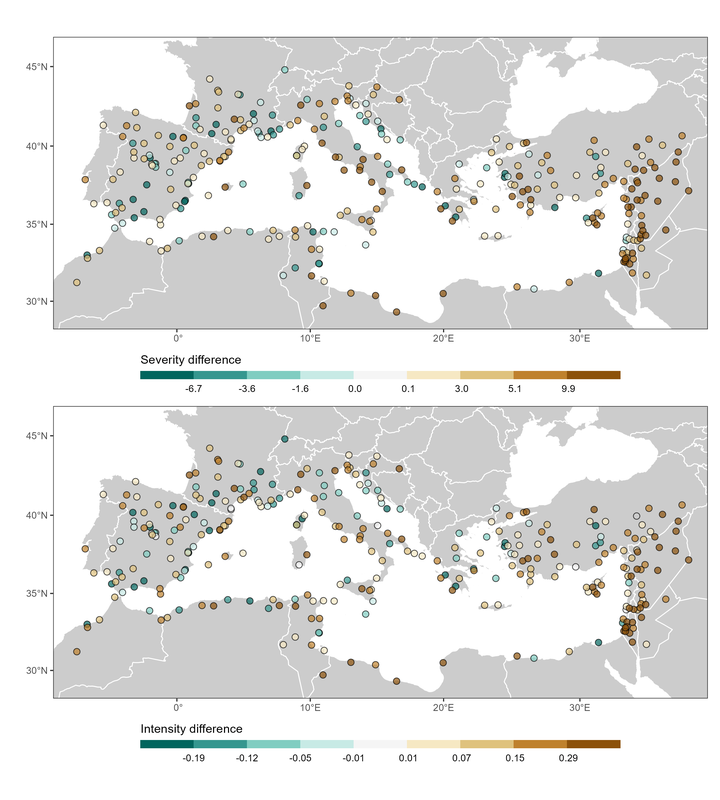 Drought is one of the most complex climate-related phenomena and is expected to progressively affect our lives by causing very serious environmental and socioeconomic damage by the end of the 21st century. In this study, we have extracted a dataset of exceptional meteorological drought events between 1975 and 2019 at the country and subregional scales. Each drought event was described by its start and end date, intensity, severity, duration, areal extent, peak month and peak area. To define such drought events and their characteristics, separate analyses based on three drought indices were performed at 12-month timescale: the Standardized Precipitation Index (SPI), the Standardized Precipitation Evapotranspiration Index (SPEI), and the Reconnaissance Drought Index (RDI). A multivariate combined drought index (DXI) was developed by merging the previous three indices for more understanding of droughts’ features at the country and subregional levels. Principal component analysis (PCA) was used to identify five different drought subregions based on DXI-12 values for 312 Mediterranean stations and a new special score was defined to classify the multi-subregional exceptional drought events across the Mediterranean Basin (MED). The results indicated that extensive drought events occurred more frequently since the late 1990s, showing several drought hotspots in the last decades in the southeastern Mediterranean and northwest Africa. In addition, the results showed that the most severe events were more detected when more than single drought index was used. The highest percentage area under drought was also observed through combining the variations of three drought indices. Furthermore, the drought area in both dry and humid areas in the MED has also experienced a remarkable increase since the late 1990s. Based on a comparison of the drought events during the two periods—1975–1996 and 1997–2019—we find that the current dry conditions in the MED are more severe, intense, and frequent than the earlier period; moreover, the strongest dry conditions occurred in last two decades. The SPEI-12 and RDI-12 have a higher capacity in providing a more comprehensive description of the dry conditions because of the inclusion of temperature or atmospheric evaporative demand in their scheme. A complex range of atmospheric circulation patterns, particularly the Western Mediterranean Oscillation (WeMO) and East Atlantic/West Russia (EATL/WRUS), appear to play an important role in severe, intense and region-wide droughts, including the two most severe droughts, 1999–2001 and 2007–2012, with lesser influence of the NAO, ULMO and SCAND.