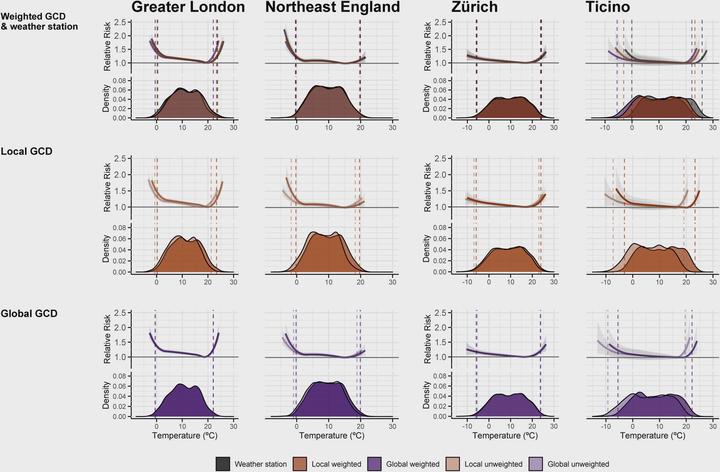 New gridded climate datasets (GCDs) on spatially‐resolved modelled weather data have recently been released to explore the impacts of climate change. GCDs have been suggested as potential alternatives to weather station data in epidemiological assessments on health impacts of temperature and climate change. These can be particularly useful for assessment in regions that have remained understudied due to limited or low quality weather station data. However to date, no study has critically evaluated the application of GCDs of variable spatial resolution in temperature‐mortality assessments across regions of different orography, climate and size. Here we explored the performance of population‐weighted daily mean temperature data from the global ERA5 reanalysis dataset in the 10 regions in the United Kingdom and the 26 cantons in Switzerland, combined with two local high‐resolution GCDs (Haduk‐grid UKPOC‐9 and MeteoSwiss‐grid‐product, respectively) and compared these to weather station data and unweighted homologous series. We applied quasi‐Poisson time series regression with distributed lag non‐linear models to obtain the GCD‐ and region‐specific temperature‐mortality associations and calculated the corresponding cold‐ and heat‐related excess mortality. Although the five exposure datasets yielded different average area‐level temperature estimates, these deviations did not result in substantial variations in the temperature‐mortality association or impacts. Moreover, local population‐weighted GCDs showed better overall performance, suggesting that they could be excellent alternatives to help advance knowledge on climate change impacts in remote regions with large climate and population distribution variability, which has remained largely unexplored in present literature due to the lack of reliable exposure data.