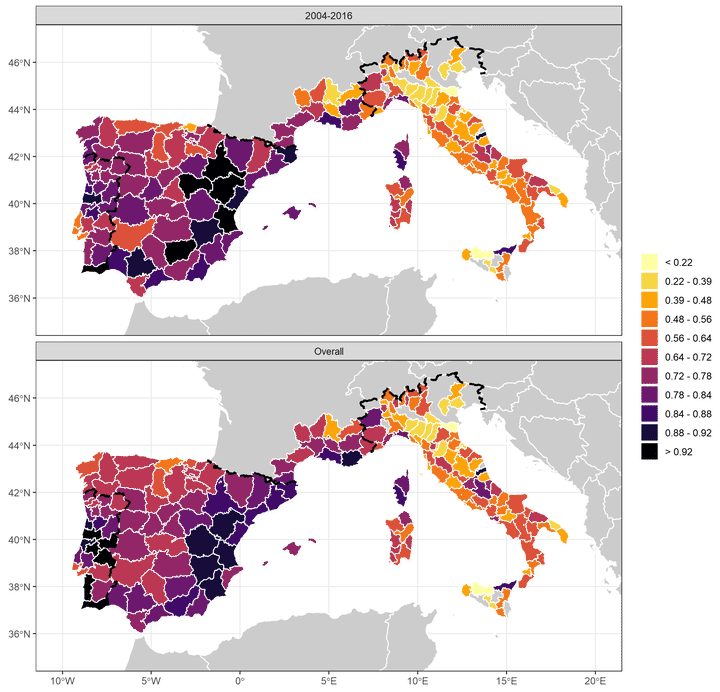 The most widely used metrics to characterize wildfire regime and estimate the impact of wildfires are total burnt area (BA) and the number of fire events (FE). However, these are insufficient to analyse the threat to society of a new fire regime characterized by a higher occurrence of very large events. To overcome this weakness, we propose the use of a Concentration Index (CIB) which makes it possible to identify spatio-temporal patterns. The frequency distribution of BA follows a negative exponential distribution almost everywhere, in which a small minority of FE are responsible of the majority of BA. In this article, the spatio-temporal behaviour of BA is analysed in Western Mediterranean Europe, with particular focus on Portugal, Spain, France and Italy, using data from the European Forest Fire Information System and national wildfire databases. This is the first time that the CI has been applied to wildfire events. This research shows that, in most Mediterranean European countries, the amount of BA is increasingly related with a lower number of fires. The spatio-temporal distribution of CIB shows high variability in all of the countries analysed in Europe. Portugal and Spain show increasing significant trends of CIB +7.6% (p-value = 0.001) and +1.3% per decade (p-value = 0.003). Statistically significant correlations for Portugal, Spain and Italy are also found between the annual CIB and several teleconnection indices. The application of the CIB demonstrates its discriminatory ability, which is a key point in detecting vulnerable areas and temporal trends under climate change.