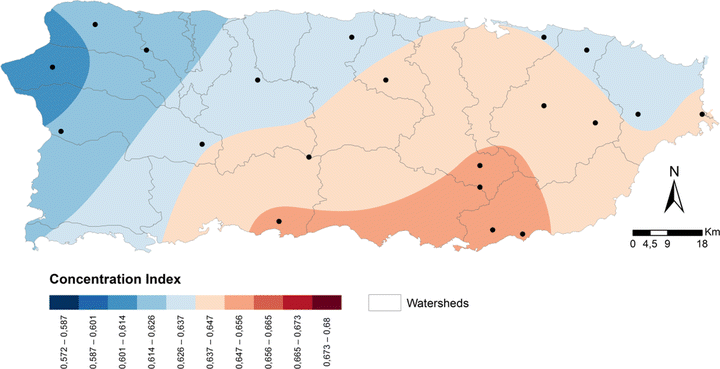 The present study analyzes spatial patterns of precipitation Concentration Index (CI) in Puerto Rico considering the daily precipitation data of precipitation-gauging stations during 1971-2010. The South and East interior parts of Puerto Rico are characterized by higher CI and the West and North-West parts show lower CI. The annual CI and the rainy season CI show a gradient from South-East to North-West and the dry season CI shows a gradient from South to North. Another difference between the rainy season CI and dry season CI is that the former shows the lowest values of CI while the latter shows the highest values of CI. The different types of seasonal precipitation seem to play a major role on the spatial CI distribution. However, the local relief plays a major role in the spatial patterns due to the effect of the air circulation by the mountains. These findings can contribute to basin-scale water resource management (ooding, soil erosion, etc.) and conservation of the ecological environment.