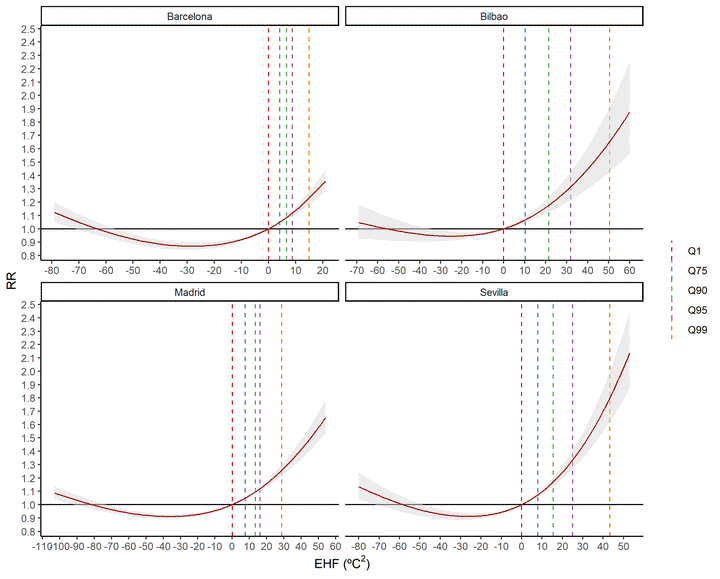 In the current context of climate change, heat waves have become a significant problem for human health. This study assesses the effects of heat wave intensity on mortality (natural, respiratory and cardiovascular causes) in four of the largest cities of Spain (Barcelona, Bilbao, Madrid and Seville) during the period between 1990 and 2014. To model the heat wave severity the Excess Heat Factor (EHF) was used. The EHF is a two-component index. The first is the comparison of the three-day average daily mean temperature with the 95th percentile. The second component is a measure of the temperatures reached during the three-day period compared with the recent past (the previous 30 days). The city-specific exposure-response curves showed a non-linear J-shaped relationship between mortality and the EHF. Overall city-specific mortality risk estimates for 1th vs. 99th percentile increases range from the highest mortality risk with 2.73 (95% CI: 2.34-3.18) in Seville to a risk of 1.78 (95% CI: 1.62-1.97) and 1.78 (95% CI: 1.45-2.19) in Barcelona and Bilbao, respectively. When we compare our results with risk estimates for the analyzed Spanish cities in other studies, the heat wave related mortality risks seem to be clearly higher. Furthermore, it has been demonstrated that different heat wave days of the same event do not present the same degree of severity/intensity. Thus, the intensity of a heat wave is an important mortality risk indicator during heat wave days. Due to the low number of studies on the EHF as a heat wave intensity indicator and heat-related mortality and morbidity, further research is required to validate its application in other geographic areas and focus populations.